You have to be weirdly specific, apparently.  For instance, searching “Lafayette tip yo’ waitress gif” gets you this:

Okay, anyway.  My struggles finding gifs are not the point of this post.  This post is about food, right?  And not at all about how excited I am for the next season of True Blood.  Because that…well.  That’s just kind of a constant.

To kick off my season of Cooking the Books (see also: all the cookbooks I got for my birthday) I cracked the spine on True Blood: Eats, Drinks, and Bites from Bon Temps with Lafayette’s “Gumbo Ya Ya”.

I have this idea and granted it may be a very incorrect idea but in my head gumbo is like Louisiana’s answer to chicken soup.  And by “answer”, I really mean something more along the lines of someone in Louisiana once took all the things that are great about chicken soup and decided to make it sassy.  And then added shrimp.

(In my head, this was probably the fault of some long-lost Lafayette ancestor.  Doesn’t even matter that Lafayette is a fictional character.  Don’t crush my dreams.)

A good gumbo has a thick sauce with enough oil to coat your throat and more than enough spice to clear you out.  That sauce should be vegetable-laden, and the whole thing should be something you want to stick your face over for long enough to steam every ounce of bad juju out of you.

That’s what I think, anyway.  And I mean, what do I know?

But whatever.  My gumbo fit all of the above criteria.  It’s a little off from LaLa’s recipe (mostly because we couldn’t find a piece of chicken small enough to thaw in the time we had because we are sometimes airheads) but it was still mighty delicious.

The great part about gumbo (other than the “eating it” part, which I think is pretty inarguably the best) is that all the hard work happens right off the bat.  Yeah, you have to make a roux, and yeah, you have to babysit the shit out of that sucker to make sure it gets dark enough but doesn’t burn.  But after that, gumbo is smoooth sailing.

Making a roux will make you feel a little disgusting at first with the amount of oil you’re unabashedly pouring into the pan. Embrace it. It gets better.

(Roux: pronounced like “rue”.  The basis of many great things, used in French and by default Cajun cooking.  Made from cooking together fat and flour.  Varies in color depending on what you’re making; for a béchamel, you’re going to want a very light roux, but for a gumbo you want that sucker browned.) 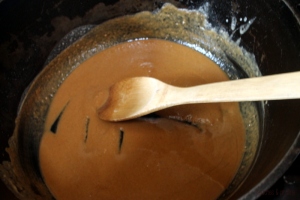 Once you’ve got your roux situation under control, it’s all easy.  You’ve already got enough oil to cook any/all veg your little heart could desire, so go ahead and dump all that in.

Except the okra.  The okra has to wait. 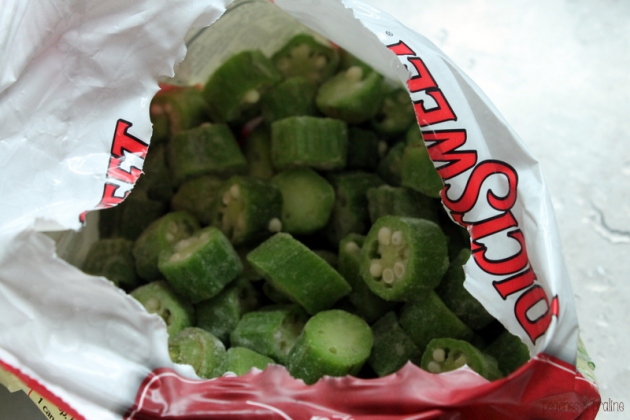 There’s a few more things that go in here– chicken broth, spices, some sausage, and, if you’re using it, the chicken itself; with about ten minutes to go, add the okra and shrimp if you’re using either of them. 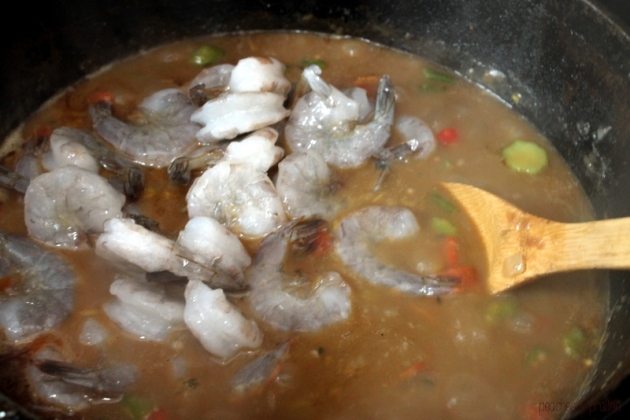 Okay, so LaLa didn’t say to use either. But a, okra, and b, there wasn’t really a good deal of protein otherwise unless we DID put the shrimp.

Again, planning ahead helps so you don’t wind up using still mostly-frozen shrimp and having to pull the tails off while you try and eat it.  Live and learn.